Where Do Berber Rugs Come From? 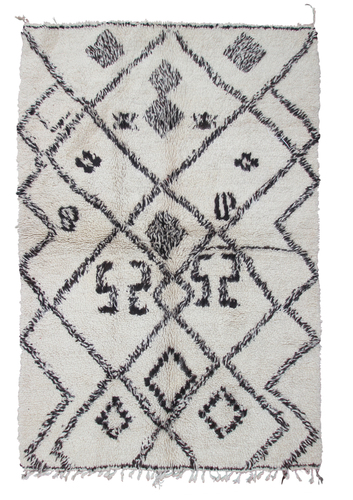 Berber rugs are famous all over the world, and they have been like that for many years. They are almost unique in the modern world for preserving patterns and techniques that date back to ancient times. Most of those patterns have historical ties to specific tribal groups, which makes the Beni Ourain rugs distinctive and very different from those produced by other groups in Morocco. This uniqueness is part of the charm, since it allows anyone who is familiar with the rugs and their history to simply glance and a rug and understand its origins.

Although modern Berber rugs are works of art as much as they are practical tools, they developed from a purely pragmatic tradition. There is some evidence to suggest that the rugs date back to the Paleolithic Period, but most of their history has been lost due to the passage of time.

It is known that the unique features of the rugs developed in response to the environment of Morocco and the lifestyles of its people. The area’s climate is quite variable, since the desert tends to be hot and the mountain peaks tend to be cold. That forced the early Moroccans to develop techniques that could make rugs that were suitable for either set of conditions. Since they were generally nomadic, they also needed to make sure that their rugs were sturdy enough to hold up to heavy use and light enough to transport with ease.

They used their rugs as a source of insulation homes and cushions while sleeping or riding. They spent a great deal of time surrounded by their rugs, so it was only natural for them to start decorating them as well. Patterns developed naturally over time, and weavers taught them to their apprentices, which were usually part of the same tribe. That eventually led to the patterns getting associated with the tribes themselves.

The rugs remained a largely local phenomenon until the 20th century, when western designers discovered Beni Ourain rugs. Those designers loved what they saw, and they brought the rugs into prominence. In the modern world, they are a major source of pride and wealth to the people of Morocco, particularly the rural weavers who still work with the traditional methods. They retain their practical value, but the artistic aspect of the weaving has risen to prominence because it is easier to keep the rugs in good condition in a modern home than in an ancient tent.

Berber rugs are popular in part because they are easy to use. Their durability means that they can go almost anywhere in the house, although their comfortable texture does make them perfect for places that people go with bare feet. Rugs that have bold patterns tend to work well as the centerpiece of a room, and are perfect for breaking up the appearance of a large and monotonous floor. Rugs with subtle patterns work better as accessories that go next to furniture or other large objects and complement their appearance.