The Striking Berber Rugs of the Atlas Mountains 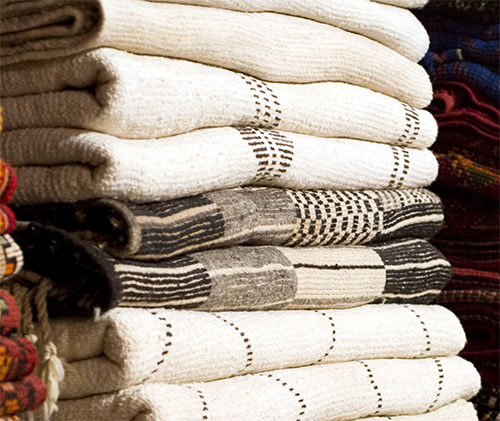 Moroccan Berber Rugs have been woven by the Berber women of the Atlas mountains since at least the 7th century. They are among the most celebrated and sought after folk art rug styles.

The Berber tribes reside in the Atlas mountains of Morocco. There are estimated to be 25 million of the Berber people comprised of dozens of tribes, including the renowned Beni Ourain group which has more than a dozen smaller tribes, each with its own symbolism and weaving style. The rugs and carpets and tapestries each display the traditional appearance of the region of each distinctive tribe. Each tribe has its own repertoire of drawings and textile. The plain weave rugs are constructed with a variety of stripes, and sometimes rarely with diamonds, triangles and other geometric patterns. Sometimes decorative additions such as fringes and sequins are added depending on the particular tribe. Since the Berbers of Morocco are semi-nomadic their lifestyle is suited for weaving rugs and tapestries. Traditions and customs for weaving vary from one region to another.

The women of the Berber tribe pass down the secrets of making rugs, including unique family patterns, looping styles and traditional colors. Each generation of women passed it on to the next. These carpets and rugs were used as horse coverings, blankets, and decorative hangings.

As the art of the Berber rug evolved so did the demand for Beni Ourain rugs begin to grow. These rugs were prized as gifts and many can be seen in palaces and places of worship and other historic edifices throughout the Near East and in Europe. It was not long before ordinary people wanted them in their own homes. Because they were both beautiful and useful, they were passed down within families for generations. Currently Beni Ourain rugs are once again soaring in popularity among those who wish to decorate their homes with beautiful and lasting things.

These beautiful carpets and rugs, woven by the Beni Ourain tribes-people in the Atlas Mountains are a great cultural contribution from Morocco. They are now more than ever exciting consumers as they have for centuries. They are being used as the centre piece for beautiful rooms and homes. Home decorators who are in the know are buying them to enhance their decor and to pass on to their families. They are truly an item that will be prized from generation to generation.

Berber rugs are made by an all natural process that uses local sheep wool and vegetable dyes. They are woven from hand-spun wool and are entirely ecologically friendly. Very little has changed in their construction and design over the centuries, making them both antique and fresh in their presentation. They are truly timeless and can never go out of style.

An interesting note about the vintage Beni Ourain carpets is that they are still less expensive than most other types of carpets. This makes them affordable for those who appreciate beauty, no matter their station in life. There are few things in life that are both affordable and beautiful and that can be passed down through the generations while maintaining their value. It is for this reason that these beautiful rugs from an ancient culture have once again found a popularity that is not likely to fade. They are truly works of art representing an indigenous people.

Cowhide Rugs Have Many Fans

Back to Top Copyright © 2013 - Cowhiderugsblog.co.uk